Sunday 12th February saw our club finishing the last of the winter Sportshall mini League, held at Chesterfield, in a very respectable 2nd place overall, a position we have worked hard to maintained since the first competition. 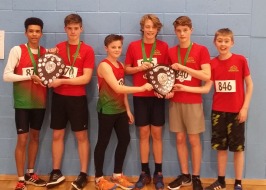 U13 boys and U15 boys have performed tirelessly throughout the whole competition and consequently
came away with the winners shields for their age categories. The U13 boys team; Eddie Fenton, Byron Masterson, David Laver, Frankie Heathcote, Gregor McGill & Alex Needham beat Amber Valley & Erewash AC by a convincing 160 points.  While the U15 boys; Elliott Archibald, Fraser Masterson, Isaac Quinn & Freddie Hatcher had a closer fought battle, winning by only 47 points.

Individual medals were also awarded to athletes who had set event records during the season.  Our team won a fantastic 9 medals, going to, Elliott Archibald for 2 lap & 8 lap Parlauf which he ran with Fraser Masterson. Megan Harris-Wood got 2 medals for her records set in 4lap & 6 lap, Eddie Fenton was awarded 3 medals for records in 4 lap, 6 lap & 8 Lap Parlauf with Byron Masterson.

On the day all athletes competed in their events with the same strength and determination they have shown in every competition. U11 Girls saw Freyer Hatcher win the 1 lap with Eva-Jane Berry 3rd in 3 lap and Courtney Limer, took 3rd in Speed Bounce. In other events, including High Stepper & Standing Long Jump (S.L.J) Marrisa Jackson, Thalia Parker-Heath, Sienna Jackson & Martha Harris-Wood all performed to their best ability in an effort to win points for their team.  U11 boys where a little thin on the ground with only Morgan Barker competing hard in 1 lap, High Stepper & Speed Bounce.

U13 boys have shown their strong athletic abilities at every stage of this competition and today was to be no different, Byron Masterson and Eddie Fenton took 1st and 2nd in 2 lap and then set a new record in the 8 lap Parlauf, Eddie also took 3rd in S.L.J & Byron 2nd in Shot.  David Laver showed great athletic ability and worked hard for the club, he came 3rd in Shot, 5th in 2 lap & 7th S.L.J. Alex Needham experienced his first competitive race today and ran exceptionally well in front of a crowd that cheered him in as he crossed the line.

U13 girls continued to be at the top of their game with Megan Harris-Wood, Katie Taylor, Ruby Burton, Jaime-lee Taylor, all competing hard to gain high points for the club across all events, with Katie Taylor winning 1st in Shot and teaming up with Megan to come 2nd in 8 Lap Parlauf. Nicole Johnson  & Millie Prior competing for the first time and gained valuable experience to prepare them for the upcoming competitions.

Finally the U15 teams, for the boys the formidable Elliot Archibald took 1st in 2 lap, 4 lap & Standing Long Jump. Fraser Masterson performed strongly, taking 2nd in Shot, 4th in 2 lap & 4th in S.L.J. Toby Stupples Newton, also a new comer to the competition showed great promise as he was 2nd in 4 lap, 2nd in Speed bounce and 5th in 2 lap.  The girls, Sosseh Badje, Charlotte & Aimee Sweetmore & Sasha Scragg all preformed to their usual high performance in every event they entered, Sosseh was 2nd in 4 lap & Speed Bounce & 3rd in 2 lap, Charlotte took 3rd in 4 lap, Sasha 4th Speed Bounce and Aimee 3rd in 2 lap, all gaining high points for the club and taking 2nd place in the relay race.

After seeing such an amazing amount of effort and athletic ability throughout this whole competition we congratulate each and everyone of you who have entered any of the 6 meetings.  We are now looking forward to the Derbyshire Track and Field Mini League which starts in April.

Advance warning of a change to club membership…

The committee for HPAC would like to advise you that we are going to be introducing a membership fee. This will start on the 1st April 2020 and will be £20.00 per year. Every member will receive a members pack, including an information pack, a new T-shirt, and a few extras!!

We feel this has become a necessity to help us keep our membership records in order and to help cover the cost of England Athletic’s affiliation fee that we pay for each athlete every year.

More detailed information on how to pay etc will be sent out shortly.

Many thanks for your continued support.